We just did our special release of the new "Moose Soup" Wild Rice IPA!

We were up in Duluth, MN this morning announcing the special release of our newest brew, "Moose Soup" Wild Rice IPA on KQDS 94.9FM! Stop by MLB to get a pint or can, and if you want to know where we came up with the name, click HERE 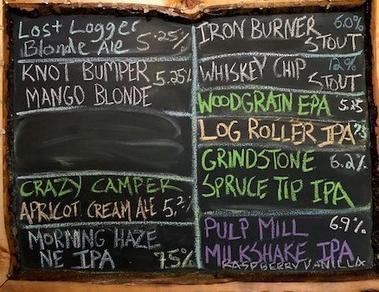 We were featured on WDIO Channels 10/13 News!

We were just featured on Fox21News in Duluth, See the story here..

Moose Lake Brewing Company started selling 24 oz. crowlers this week. For those unfamiliar with the term, a crowler is an oversized can!

Moose Lake Brewing Co. now has a beautiful outdoor patio with plenty of seating.  Sit back and relax and take in the view of Moosehead Lake while trying one(or all) of our awesome beers!

Paul Christensen and Shawn Wigg met like many people do in the brewing industry—through mutual friends who also loved beer.

Video below from 2018.  We no longer have a golf simulator, nor do we currently offer our "Free Food Wednesdays" until further notice.

You can now find our 25 oz. Crowlers at a variety of liquor stores!

Moose Lake Brewing is proud to announce you can find our 25 oz. Crowlers at a variety of liquor stores, now ranging as far north as Lakeside Liquor in Duluth and as far south as Viking Liquor Barrel in Prior Lake, MN! For a full list of where you can find our beers, click HERE

Moose Lake Brewery is not scared to compete for local taste buds. In Mid- October you can be the judge for your self as they plan to open.

Molly and Kylie were live from Moose Lake Brewing Company on Friday! This brand new brewery on Moose Head Lake plans to open.

We were featured on Fox 21 News!

We were just featured on Fox21News in Duluth, See the story here..

Moose Lake Brewing Co. just rocked the All Pints North BrewFest in Bayfront Park in Duluth, MN! Be sure to check us out at the Moose Lake Chamber BrewFest at Doc's Bar & Grill in Sturgeon Lake, MN Saturday, September 9th from 4-8pm!